Nuno da Luz. ON AIR, 2019
Air is matter, it is a physical space, a place of opposing energies and forces, in which waves become transmitters and it all goes live. ON AIR is the title of a performance and an installation in which da Luz uncovers two of his main research areas. On the one hand, the performance, live, in which the superimposition of natural and manipulated sounds, both live and reproduced, present the many layers of noise and sound that overlap in our day-to-day lives. Following an eminently ecological vision, the sounds of nature's register are joined by the sounds of the environment captured live, turning the outside into the inside, dimensioning a holistic existence that he rounds off by playing different combinations of instruments. On the other hand, the installation revisits another of his main interests, radio understood as a space for natural frequencies waiting to be occupied by new sounds. Da Luz has prepared an itinerary through the rooms of CentroCentro using a series of available radios that allow the visitor to tune into one frequency in different places, discovering forgotten sounds.

María Salgado. Lírica / 3, 2017
«Lyric: two people talking to one other beneath a blanket for three thousand years. Lyric: after a thousand years, they write a sentence on a piece of paper. Lyric: the sentence remains. Verses and sentences accumulate written in books, and they are also memorized. Lyric: they are recorded and erased. They mutate, they lose and regain their music. Etc. The piece that I call Lírica / 3 is a really simple and analogic device for the appearance of textual materials that are thematically and semantically related to lyrical poetry (whatever that may be: memories, dreams, voices that want to speak and be heard, a sort of me and a sort of you...). In other words, it is a kind of recital, and as such it contains verses, pieces of poems and complete poems, and at the same time it contains small reflections on amplification (of the sound of the voice, of private feelings, and the orders and order messages emitted in the public space), while the voice changes from one container to another».

Nuno da Luz (Lisbon, 1984) is an artist and editor whose work includes explorations of the sound of places –in which resonance and reverberation turn into a tangled mess of echo and ecological processes–, and the editing of books under the ATLAS Projectos label. In 2015, he took by Bruno Latour’s Masters Course on Experimentation in Art and Politics at the Political Studies Institute in Paris. He is also a co-founder of COYOTE, a cross-sectoral collective that works on experimental formats. He is currently developing, together with Ana Vaz, a radio series called The Voyage Out Radio Series: 2222 ∞ 2022, an exploration of the sound of the film that this filmmaker is directing.

María Salgado (Madrid, 1984), poet, teacher and researcher in contemporary poetry. She works with language as a material for texts, audiotexts and actions. She became a Doctor in Literature Theory and Comparative Literature at Autonomous University of Madrid in December 2014, with a thesis on language-oriented poetics in Spain since 1964. She is part of the Seminario Euraca research group, a reading, writing and wild thinking collective, that has had several offices in Madrid. She has published five poetry books, including ready (Arrebato, 2012), Hacía un Ruido. Frases Para un Film Político (Contrabando, 2016) and Salitre (La Uña Rota, 2019). She was granted a scholarship by the Akademie Schloss Solitude (Stuttgart) for the winter semester of the 2017/2018 academic year. Since 2012, she has been exploring the scenic dimension of sound with composer Fran MM Cabeza de Vaca, with whom she is currently working on the Jinete Último Reino project. 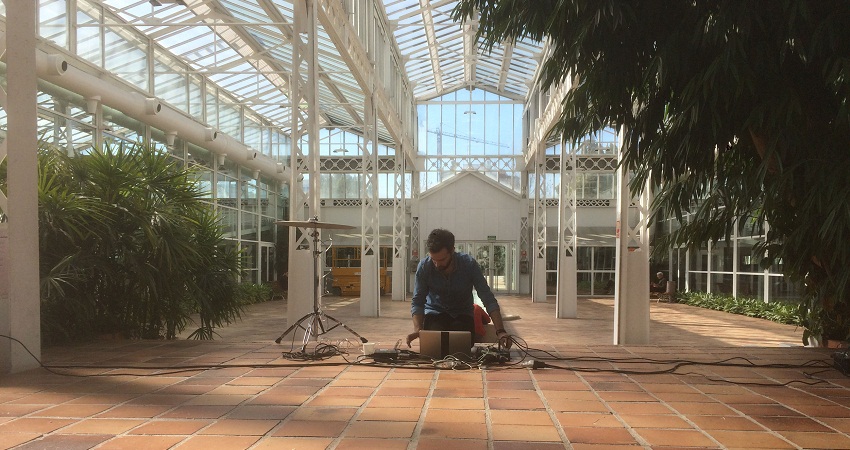