By studying cities and the infrastructures that articulate them, we can discover the dreams and failures of utopias of the past. By imagining the cities of the future, we can unveil the excesses and follies that arise from visions that are seen today to be obsolete and ineffective. A new infrastructure is always the promise - real or illusory - of a better city.

The development of transport networks and communications between the places we inhabit shapes our lifetime and our mental habits. The experience of the day to day has rendered invisible certain models of mobility under which we operate. However, many other aspects affect us in a radical way, such as pollution or the displacement of large population masses.

Trans Utopias. Mobility. Movement. Mobilization is a new exhibition that explores possible places from which to ponder mobility today. The exhibition resorts to speculative and service design, contemporary art, futuristic architecture, historical urban planning documents, the design of information, photography and cinema. All these elements provide clues that let us see the patterns of a way of building futures through the paths of the mobility of today. The exhibition explores how various temporalities are integrated that coexist in the same space and determine life forms. In this way, the Lumière Brothers test their machine to create moving images, the cinematograph, on carriages and means of transport, including the moving sidewalks that Eugène Hénard invented for the Universal Exposition of 1889. The movement of the city also activates its own imaginary. In much the same spirit, nowadays we try to capture the heartbeat of the city on the move using data from the technologies we use, such as GPS, smartphones or step counters.

The drawings of the networks that underlie our day-to-day routes are related to new designs and utopias. These respond to different critical perspectives on the sustainability of city models. Which is why the exhibition contains both the urban layouts of Hénard, who invented roundabouts and imagined the cities of the future back in the 19th century, and the fictitious regions created by Dunne & Raby with their United Micro Kingdoms. Based on speculative design, these designers point ironically and critically to other futures where ideological forms establish economic, political and social boundaries. Trans Utopias endeavours to explain, therefore, the accumulation and overlapping of utopian models of thinking and exercising mobility.

In 1914, the futuristic architect Antonio Sant’Elia drew numerous projects that relate to the new needs of urban mobility. These transport engineering works involve the design of railway stations and airports in which he reflected his ideas about what Futurism took as its premise, that is, the constant mutability of architecture itself, and the dynamism it generates around itself. Sant’Elia, Hénard, Renzo Picasso or Constant, and indeed other contemporary architects and engineers who can be seen in the exhibition, imagine in their own time the city of the future, assigning it a new image that they stratify through their drawings and their projects - which may not always be achievable. This unfinished or impossible dimension of projects on mobility will be part of its imaginary condition.

Talking of mobility today necessarily implies confronting challenges such as the important movements of refugees, with the foundations left over from the industrial revolutions and the promises of freedom of the utopias that followed in their wake. Under an idea of progress, the first transport networks created opportunities and limits in the cities in which we live. To a large extent, those foundations are anachronistic for the development of other spaces of coexistence, for the creation of new communities and ways of using public spaces.

The car culture that derived from the American dream that some documents from the Prelinger Archives remind us of, is refuted by Jean-Luc Godard’s incisive camera in his famous traveling shot in his 1967 film “Weekend”, and evoked by artist Damián Ortega’s empty Volkswagen Beetle from 2006. Ironically, this work coincides in the exhibition with Nerea Calvillo’s work on air quality in Madrid, and with the visualisation of data on traffic jams on the planet, in the MIT’s Senseable City Lab (2018).

Obsolescence and the excessive worship of engines are to the fore in the work of photographer Eric Tabuchi and architects Diller Scofidio +Renfro. Tabuchi, with his version of Ed Ruscha’s famous 26 petrol stations in the series that shows the new uses that abandoned French petrol stations have been put to; Diller Scofidio +Renfro with their conversion of old train tracks in the Chelsea neighbourhood of downtown Manhattan, in a raised public park in which people can stroll and be in contact with nature in the heart of New York. Something that is equally remarkable in this case is the initiative behind these conversions, which came from the neighbours themselves and the priorities of the citizens of today. These urgencies also appear in works such as the prototype created by Umbrellium which presents a smart zebra crossing whose traffic signs are activated in real time in line with the speed of the pedestrians using it.

Other projects, whether through observation or selective usage, present different ways of occupying public spaces. Facundo Beraudi, for example, with the documentary he shot during an entire year from a balcony on the second floor of a building in the centre of Barcelona, or the one William Whyte shot in squares and children’s parks in New York. Both works reveal behaviours and uses directly related to the appropriation of the public space, an issue that sociologist Henri Lefebvre theorised on in such books as La Production de l'espace (1974) or in his voluminous Critique de la vie quotidienne which he wrote between 1961 and 1981. For his part, artist Pau Faus aligns himself with these observations by filming urban spaces in one of the most heavily planned cities in the world, Brasilia, in which pedestrians carve out their own paths and in doing so, break with the regulated urban layout through the habit of crossing enclosed spaces to shorten the distance they have to go, finding alternative paths.  Walking as an artistic practice is present in the exhibition through the work of other artists such as Stanley Brouwn and his measurements of space through steps and Brian House with his annual vinyl recording of his ramblings and itineraries that we can listen to in the exhibition.

We cannot talk about mobility as a determining factor of the urban experience without turning the spotlight on the excluded people on the other side of the many barriers that we are raising for political or economic reasons. In Seamless Transitions (2015), James Bridle, one of the most meticulous researchers of new technological control mechanisms, reconstructs different detention and deportation centres for illegal immigrants to the United Kingdom, set up in airports and legal installations. These are spaces that we do not have access to and where an end is put to the hopes of those who try to cross a border to find a better life. Multiplicity, the research group founded by architect Stefano Boeri, carried out an exercise in 2003 that shows the different ways in which an Israeli citizen and another citizen with Palestinian documentation are treated when they cross border checkpoints in the Gaza Strip. Yarra Said’s flag for Refugees or community representation systems using mobile phones provided by Antoni Abad are mechanisms designed to give visibility to groups who fall outside the majority gaze, all of them protagonists in the conflict that generate mobility: some because they are unable to move about freely, others because they are witnesses of chaos and the sometimes violent friction involved in the act of moving through a megacity like Mexico City.

Finally, other speculative contributions such as those by Zuloark or Lavinia Scaletti arise from the contemporary experience of the shortcomings of past planning. In the case of Scaletti, by proposing a city without houses, collectively designed and used, thereby putting paid to the status of “homeless”, while Zuloark launches a fresh counterproposal to utopian imaginaries generated by groups of architects such as Archigram or Superstudio. Manuel Dominguez shows with his VLS (Very Large Structure) that with the technology we now have available, a self-managed city is possible today.

This exhibition does not draw a historical thread on how these events evolve, nor does it opt for an artistic illustration of the issue, rather it addresses a variety of ways to understand the problems and conflicts that arise from mobility, including its political implications. In all these acceptances of what mobility means, Trans Utopias endeavours to offer a bifurcated story and a reversible itinerary that will awaken in the spectator links with his or her own experience of this global problem. 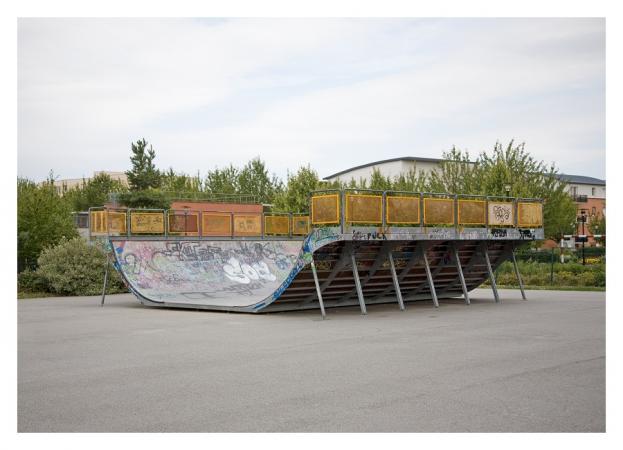 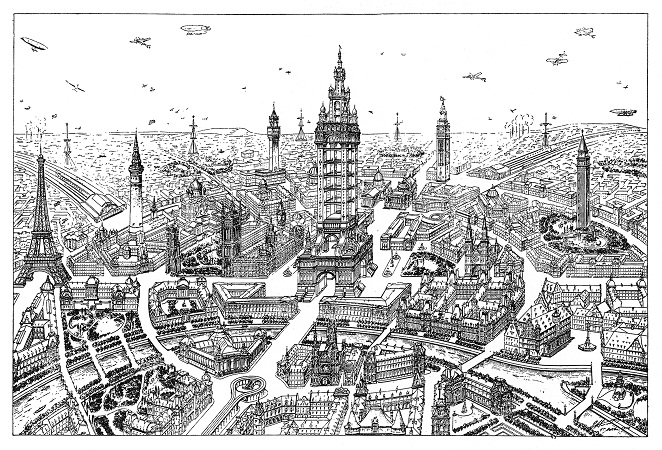 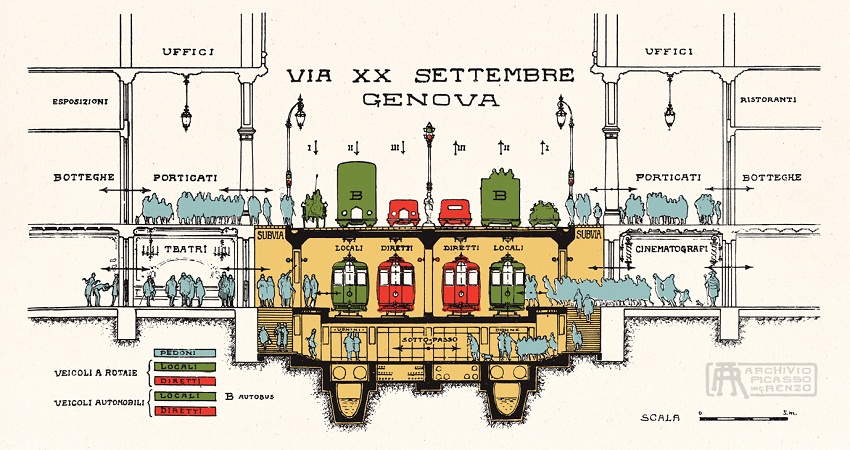